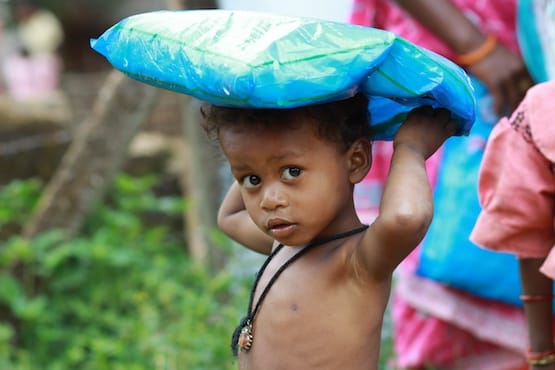 Against Malaria Foundation works to prevent the spread of malaria by distributing long-lasting, insecticide-treated mosquito nets to susceptible populations in developing countries. AMF has been active in 36 countries in Africa, Asia and South America, with a particular focus on sub-Saharan Africa.

Malaria is one of the most severe public health problems worldwide. [1] It’s a widespread and deadly disease concentrated in equatorial regions, primarily in sub-Saharan Africa, where 93% of malaria-related deaths occur. [2]

Each year, over 200 million people become infected with malaria — and 435,000 die. [3] Over 60% of these deaths are children under five years old, making malaria one of the leading causes of child mortality in Africa. [4]. Even when non-fatal, malaria can damage children’s cognitive development. Pregnant women are also highly vulnerable, with the health of both mother and unborn child at risk. [5]

Every year, over 200 million people become infected with malaria — and 435,000 die. Over 60% of these deaths are children under five years old. Malaria is a significant financial drain on both households and countries. It’s estimated to cost Africa US$12 billion every year in direct costs of health care, absenteeism, days lost in education, decreased productivity, and loss of investment and tourism. [6] A 50% reduction in global malaria incidence is estimated to produce $36 in economic benefits for every $1 invested globally, with an even greater estimated return on investment of 60:1 in sub-Saharan Africa. [7]

Malaria is spread by mosquitoes at night while people are sleeping. When LLINs are hung over beds and sleeping spaces, mosquitoes land, pick up insecticide on their feet, and die. This is a hugely effective intervention. The Centers for Disease Control (CDC) confirms LLINs have been associated with sharp decreases in malaria in countries where malaria programs have achieved high LLIN coverage [8], and the World Health Organization says that “insecticide-treated mosquito nets are currently the only viable option to prevent malaria transmission in large parts of Africa.” [9]

A significant number of studies, including randomized controlled trials, have demonstrated and quantified the effectiveness of LLINs. We know that malaria can be brought under control and infection rates kept low long-term when LLINs are effectively distributed over the course of a decade in malarious areas. Eradication is possible — and is occurring! In fact, Sri Lanka was declared malaria-free in 2017 after three years of no native cases of malaria [10].

How Against Malaria Foundation works

Unlike traditional net distributors, AMF pays particular attention to distributing nets accountably, using household-level data to ensure nets reach beneficiaries equitably. AMF reviews requests for nets from Ministries of Health in malaria-affected countries to determine where the malaria burden is high, if there is a funding gap, and where the nets will do the most good.

Then they purchase (typically) multiple millions of nets and team up with national health systems and other operational partners to ensure nets reach their beneficiaries as intended. An LLIN from AMF costs only US$2 and protects two people for up to three years. AMF’s work achieves “universal coverage,” which means all sleeping areas in a community or region are covered. This is the most effective way of driving down malaria.

Video of a bednet distribution in Kadokolene, Uganda. A bednet costs only US$2 and protects two people for up to three years.

Post-distribution, AMF tracks net presence, use, and condition for three years by making unannounced visits to a randomly selected 1.5% of recipient households. They also track malaria rates. In 2014, AMF introduced smartphone technology in place of paper-based data collection to make monitoring even more cost-effective and accurate. [11]

What can you help Against Malaria Foundation achieve? Enter a donation amount below to find out.

What makes Against Malaria Foundation so effective

Every dollar donated from the public is used to buy nets. An LLIN from AMF costs only US$2 and protects two people for up to three years.

AMF gathers significant background and region-specific data ahead of a distribution to ensure equity, effective use of funds, and full coverage. They then track bednet use alongside malaria rates for three years post-distribution.

Bednets are estimated to have averted 450 million cases of malaria between 2000–2015, and, according to the CDC, “in community-wide trials in several African settings, [bed nets] were shown to reduce the death of children under 5 years from all causes by about 20%.” [12][13]

From its inception, AMF has attracted and maintained significant pro bono support to fund its operations — so much so, the organization has almost no central costs. As a result, 100% of donations received from the public buys nets.

During the distribution of nets, local partner organizations ensure local communities are educated about proper net use, malaria prevention, symptoms, and treatment.

One AMF bednet costs only US$2 and protects two people from malaria for up to three years.

Against Malaria Foundation’s accountability and sustainability

AMF publishes extensive pre-distribution, post-distribution, and financial data on its website, including malaria case rates and survey results. [14] They also publish their year-to-date financials “in real time,” and their financial records are easily accessible. [15] Even more unique: AMF allocates each individual donation to a specific net distribution so donors can see exactly where the nets they fund go.

AMF has been operating since 2004 and has developed strong relationships with multiple operating partners in eight of the world’s most malaria-affected countries. Other indicators of the strong sustainability of AMF’s work include:

Recognition for Against Malaria Fund

AMF’s work is internationally recognized for its focus on data and accountability. AMF has been top rated by GiveWell since 2009 and also recommended by Giving What We Can and Focusing Philanthropy. [16]

How will AMF use my donation?

Every dollar from public donations is used to buy LLINs. AMF’s minimal administrative costs are already covered by a small group of private donors, and distribution costs are covered by partners on the ground. A $100 donation buys $100 of nets — nets that end up over heads and beds.

How do I know bed net recipients will use them properly?

Net distributions are accompanied by malaria education programs delivered by local health leaders, including information on effective net use. Follow-up surveys conducted by AMF consistently show this education to be effective: for example, six months after a distribution in Ntcheu District, Malawi, over 90% of nets were still being used properly, with 99% were still in very good condition. [17]

Don’t mosquitoes strike during the day as well?

The overwhelming majority of malaria-carrying mosquitoes bite people at night between dusk and dawn. [18]

Prevention is much more cost-effective than treatment. And while treatment can be very effective, even non-fatal malaria can damage a child’s cognitive development, and it is difficult to provide treatment consistently to rural regions of developing countries.

Won’t there be a malaria vaccine soon?

There is currently no effective wide-use vaccine. [19] Some experimental malaria vaccine trials have shown early promise, but malaria nets are still the most effective means of preventing malaria transmission.

What about a gene drive solution?

Gene drive technology focuses on editing gene composition. It is possible that a mosquito gene could be altered to prevent a malaria parasite from surviving — meaning the mosquito could no longer transmit malaria. Scientists, researchers, and genetic engineering regulators are working on this solution. This is an area of focus that could play a major role in malaria control in the future. [20]

Why does The Life You Can Save recommend Against Malaria Foundation?

We recommend AMF because they are an extremely effective and highly impactful organization that reduces suffering and preventable death in places of extreme poverty. AMF has been a Top Charity recommendation of one of our charity evaluators, GiveWell, for many years.

Donors in the United States can make tax-deductible gifts to The Life You Can Save and our recommended charities by clicking on the donate buttons across our website. Online donations are processed through our partner Network for Good, which is the name that will be displayed on your emailed tax receipt. For other ways to donate, see the yellow buttons at the top of this page or go here.

All photos and videos courtesy of Against Malaria Foundation.

[12] Nature, The effect of malaria control Plasmodium falciparum in Africa between 2000 and 2015

[16] GiveWell’s review of Against Malaria Foundation

[20] The American Journal of Tropical Medicine and Hygiene, Pathway to deployment of Gene Drive Mosquitoes as Potential Biocontrol Tool for Elimination of Malaria in Sub-Saharan Africa