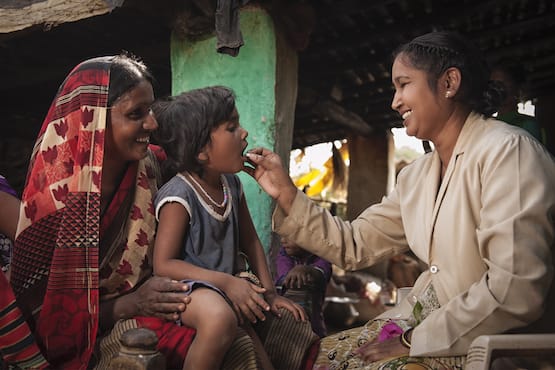 In order to tackle extreme poverty at the level it exists, how do we bridge the gap between identifying evidence-based, cost-effective interventions that work and successfully scaling them up to improve the lives of millions?

Evidence Action’s mission is to be a world leader in scaling evidence-based and cost-effective programs to reduce the burden of poverty. Evidence Action works to identify and scale interventions in Africa and Asia, filling the gap between promising research and achieving measurable impact.

Evidence Action was incubated by Innovations for Poverty Action (IPA), a highly respected poverty research network. (IPA is another of The Life You Can Save’s recommended organizations). Every year, over 829,000 people die from diarrhea caused by unsafe drinking water, sanitation, and hand hygiene — and 525,000 of those deaths being children under five. [1] Dispensers for Safe Water ensures safe drinking water in rural communities in Kenya, Uganda, and Malawi through a three-part approach:

Dispensers for Safe Water’s focus on behavioral change yields chlorine adoption rates that are five times higher than other water treatment solutions, and are sustained over time. [2] There are more than 868 million children at risk for parasitic worms worldwide. [3]

These worms interfere with nutrient absorption and cause malnourishment, anemia, and impaired mental and physical development; they also prevent children from attending school, which impacts their future success in life.

The Deworm the World Initiative works with governments to implement large-scale school-based deworming programs, currently supporting treatment of an estimated 280 million children annually. Deworm the World’s work has helped contribute to significant declines in worm prevalence in Kenya, and emerging evidence from India indicates that success in reducing prevalence is being achieved there as well. What can you help Evidence Action achieve? Enter a donation amount below to find out.

What makes Evidence Action so effective

Broad reach and potential for scale

Dispensers for Safe Water’s current cost is US$1.28 per person per year, while deworming programs supported by Deworm the World cost on average less than US$0.50 per treatment – and in some geographies, such as India, the average cost is less than US$0.10 per treatment. [7]

In areas where Dispensers for Safe Water works, use rates for chlorine have been extremely robust, ranging from over 50% to an astounding 100% in areas in Malawi. This is unheard of in the world of water and sanitation for point-of-collection products.

A randomized controlled trial of deworming in Kenya found school-based deworming reduced school absenteeism by 25%, increased hours worked as adults by 17%, and increased future wage earnings by 23%.  This evidence is only from one study from a context where worm intensity was unusually high, but it offers the possibility that deworming could have such longer term impacts. [8] [9] [10] [11]

It costs less than $2 to give a person access to clean water for a year.

Evidence Action is a model of non-profit transparency. The organization makes its documents publicly available and publishes its reports and data. Notably, when programs prove to not be effective, Evidence Action recognizes and shares outcomes, and alters its programs accordingly. One such example was No Lean Season, which received acclaim and support after initial promising results. In its dedication to ongoing proof and accountability, Evidence Action continued to pressure-test the program for scalable robustness, and when the evidence proved to be disappointing, the organization publicized the new findings and halted funding. Subsequently, operational challenges combined with the disappointing evidence led to the closure of No Lean Season. As Vox observed, “We’d benefit enormously from a nonprofit sector in which every charity was as careful and honest as Evidence Action.”

“We’d benefit enormously from a nonprofit sector in which every charity was as careful and honest as Evidence Action.” — Vox

Evidence Action’s Deworm the World and Dispensers for Safe Water Initiatives are the direct result of the work of Michael Kremer and Esther Duflo, two of the winners of the 2019 Nobel Prize in Economic Sciences. [12] Evidence Action’s Deworm the World is recommended by rigorous evaluator GiveWell, and The Jameel Poverty Action Lab lists school-based deworming as a “best buy” in terms of education and health. [13] [14]

In July 2018, GiveWell awarded a Good Ventures-funded incubation grant of $5.1 million to Evidence Action Beta “to create a program dedicated to developing potential GiveWell top charities by prototyping, testing, and scaling programs which have the potential to be highly impactful and cost-effective.” Evidence Action’s Accelerator will take forward this work, and is currently using GiveWell funding to support the Government of India’s iron and folic acid supplementation program.

How will Evidence Action use my donation?

Evidence Action will direct donations to where they are most needed. Unrestricted donations enable the organisation to determine the area of greatest need and investment, and direct those flexible funds accordingly.

Funds they direct to Dispensers for Safe Water will help enable the program to provide reliable, sustained safe water service in rural communities by financing the capital costs of installing the hardware and covering ongoing maintenance services.

Funds Evidence Action directs to Deworm the World will support their work to partner with governments and implement large-scale school-based deworming programs.

Funds which are used for Evidence Action’s Accelerator will help build the next generation of evidence-based, cost-effective interventions.

Can I specify which program receives my donation?

Evidence Action prefers donations not be restricted to a specific intervention so that they can direct funding wherever the need is greatest. For example, a particular program may be undertaking expansion due to new opportunities, or have a critical funding need that unrestricted funds can be used to fill. Donations made to Evidence Action via The Life You Can Save are unrestricted.

How much confidence do you have in Evidence Action’s Deworm the World Initiative, given the recent debate over the benefits of deworming?

In July of 2015, a re-analysis of an influential study on deworming was released, kicking off an ongoing debate about the benefits of mass deworming. Generally speaking, there appears to be a division between the health community, which is more skeptical about the benefits of mass deworming, and the development economics community, which is more enthusiastic. Each community has its own standard analytical methodology, and these different methodologies lead to different interpretations of the data. [15] [16] [17]

In addition to following the public discussion, we’ve had conversations with various experts on deworming to improve our understanding of this issue.  Everyone agrees that deworming treatments reduce worm loads, creating immediate health benefits. Second, deworming treatments are so low cost that we think they are worth supporting even though the evidence that they improve longer term life outcomes is limited.

We think the deworming debate emphasizes the need for applying rigorous scientific standards and sharing data when evaluating interventions to allow us to refine and update our collective understanding. Efforts such as Evidence Action Accelerator, which assesses whether promising interventions are suitable for mass scale or not, are critical in this regard.

Why does The Life You Can Save recommend Evidence Action?

We recommend Evidence Action’s Deworm the World program because it has consistently been named a past GiveWell top charity.  Moreover, GiveWell estimates that Evidence Action’s Dispensers for Safe Water program is about four to eight times as cost-effective as unconditional cash transfers.

Is my donation tax-deductible?
Sources

All photos and videos courtesy of Evidence Action

[9] Innovations for Poverty Action, Long-run and Intergenerational Impacts of Child Health Gains from Deworming in Kenya

[16] Columbia University, What Has Been Learned from the Deworming Replications: A Nonpartisan View