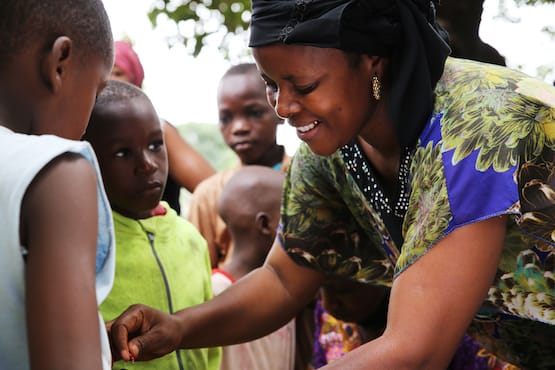 Helen Keller International’s Vitamin A Supplementation programs provide critical nutrition to children around the world at-risk for vitamin A deficiency — a condition that can lead to blindness and death.

Donate to HKI
180M
children are vitamin A deficient
100K
children die annually from VAD-related causes
A vitamin A supplement costs
US$1.23
to deliver
download page as pdf

The problem: vitamin A deficiency

According to the World Health Organization (WHO), vitamin A deficiency (VAD) is the leading cause of preventable blindness in children, and increases the risk of disease and death from severe infections. It also contributes to other severe health issues, including stunting and anemia. VAD is common in poor regions around the world — particularly in Africa and Southeast Asia — as a result of diets low in vitamin A-rich foods. [1]

Oral vitamin A supplementation can prevent child blindness and reduce mortality by 12–24% and only costs US$1.23 per supplement. The solution: oral vitamin A supplementation — also known as VAS

Oral vitamin A supplementation is “the most widely practiced approach to addressing VAD in most high-risk countries.” It involves providing children ages 6 months to 5 years with high-dose vitamin A supplements two or three times a year. WHO claims this type of supplementation can prevent blindness and reduce mortality for children in this age range by 12–24% and is extremely cost-effective: only about US$1.23 per supplement. [2] [3]

According to WHO, almost 50% of children in Africa and South Asia are vitamin A deficient — that’s nearly 180 million children. [4] An estimated 100,000 children die each year from VAD-related causes. [5]

Helen Keller International (HKI) is a longtime leader in combating VAD and its life-threatening effects with successful VAS programs across the globe. In close partnership with national governments, local organisations, and international partners, HKI helps facilitate mass vitamin A supplements to children who need it. In many countries, HKI is the lead NGO (non-governmental organisation) partner responsible for supporting VAS programs.

An estimated 100,000 children die each year from VAD-related causes. HKI’s VAS programs deliver nutritional supplements to children under 5 in a variety of ways, including the use of mass campaigns (such as National Immunisation Days and Child Health Days) designed to integrate vitamin A supplementation into broader health campaigns that address multiple public health issues simultaneously.

VAS is considered by the World Bank to be one of the most cost-effective ways to save lives. Each supplement costs about US$1.23 to distribute. [6]

Treating vitamin A deficiency in children ages 6 months to 5 years reduces all-cause mortality for that age group by 23%, measles mortality by 50%, and diarrheal disease mortality by 33%. [7]

Oral vitamin A only costs US$1.23 per supplement — and can reduce child mortality by 12–24%

Rigorous charity evaluator GiveWell commends HKI’s accountability and transparency, noting that their self-evaluation is strong compared to the vast majority of organizations, and that they share significant, detailed information about their programs. [8]

Based on its VAS programs, HKI has been selected as a Top Charity by GiveWell and is considered a four-star charity by Charity Navigator. HKI is also the proud recipient of the 2014 Henry R. Kravis Prize in Leadership. [9]

How will Helen Keller International use my donation?

While Helen Keller International operates a number of programs focused on reducing malnutrition and preventing blindness, donations made to HKI through The Life You Can Save specifically support HKI’s VAS programs, which deliver nutritional supplements to children under 5 and conduct mass campaigns (such as National Immunisation Days and Child Health Days) designed to integrate vitamin A supplementation into broader health campaigns that address multiple public health issues simultaneously.

How do Helen Keller International’s programs increase intake of vitamin A?

In addition, HKI works in many communities to increase the availability of foods rich in vitamin A through its homestead food production programs and to promote the consumption of these foods through its essential nutrition actions program.

How often do children receive treatments and how are they administered?

Ideally, children between the ages of 6 months and 5 years receive a high-dose vitamin A capsule every six months. They are usually administered by a health worker or community volunteer who cuts the tip of the capsule with scissors and squeezes the contents into the child’s mouth.

Does Helen Keller International do other vitamin A work alongside vitamin A supplementation?

Yes. HKI runs a variety of programs combating blindness and malnutrition around the world. [11] However, our recommendation is specifically for their Vitamin A Supplementation programs, which our charity evaluator, GiveWell, recommends. Donations to HKI made through The Life You Can save are all ear-marked for its VAS programs.

Why does The Life You Can Save recommend Helen Keller International?

We recommend HKI’s VAS programs because they have led GiveWell, one of our two charity evaluators, to name HKI as a Top Charity.

All photos and videos courtesy of Helen Keller International

[2] World Health Organization, Global prevalence of vitamin A deficiency in populations at risk 1995–2005

[3] World Health Organization, Vitamin A supplementation for preventing morbidity and mortality in children from 6 months to 5 years of age

[5] The Lancet, Trends and mortality effects of vitamin A deficiency in children in 138 low-income and middle-income countries between
1991 and 2013: a pooled analysis of population-based surveys