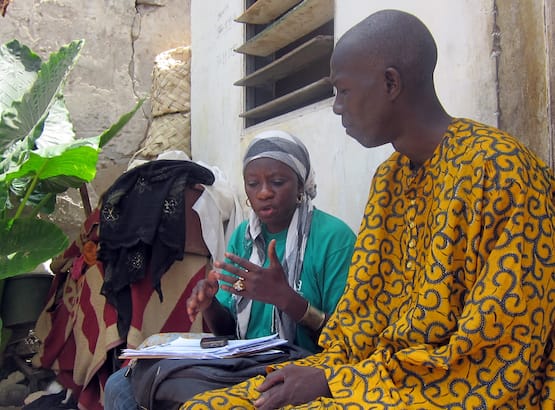 IPA is a global research and policy nonprofit that leads the field of development in cutting-edge research quality and innovation. IPA tests promising ideas across contexts and along the path to scale, shares findings with the right people at the right time, and equips partners to use data and evidence to improve lives. With a long-term presence in 22 countries in Africa, Asia, and Latin America, IPA is able to build long-term relationships with key decision-makers, whose questions and needs drive its research. Since its founding in 2002, IPA’s research has led to better programs and policies that have impacted hundreds of millions of people worldwide.

The Problem: Lack of evidence on how to reduce global poverty

In recent decades, trillions of dollars have been spent on programs designed to reduce global poverty. Unfortunately, clear evidence on which programs succeed is rare — even when evidence does exist, it is not always used by decision-makers. This leads to programs that are either ineffective or not as effective as they could be, and often to wasted money and enduring poverty.

The Solution: Creating strong evidence and equipping decision-makers to use it

Governments, non-governmental organizations, and funders need reliable evidence on what works, what doesn’t work, and why. IPA works closely with decision-makers to answer their questions and to help them apply evidence to their programs. Through this model, IPA is able to not only create strong evidence but ensure it is used to improve the lives of people living in poverty.

How Innovations for Poverty Action works

Imagine if the trillions of dollars spent on aid in the past 50 years went to programs that had a tangible, cost-effective impact. IPA exists to make this vision a reality.

In partnership with top researchers in the field, IPA designs and implements randomized evaluations  to measure the effectiveness of programs and policies aimed at alleviating global poverty. IPA’s evaluations do not simply give programs a passing or failing grade, but rather seek to uncover why they work and what adjustments will make a program more effective or work better at scale. Studies range in time from months to years — even decades. Throughout the research process, IPA works side-by-side with decision-makers––a collaborative model IPA calls “co-creation.”

To date, IPA has designed and evaluated more than 650 potential solutions to poverty problems, and has over 300 additional evaluations in progress. IPA also recognizes that producing strong evidence is just one piece of the puzzle: that’s why, in addition to running evaluations, they share evidence with the right people at the right time, support partners  to strengthen the use of data and evidence in policies and programs, and support the scaling of successful initiatives.

As an organization, IPA’s comparative advantage is its local presence in the countries where they have established offices. They work with local governments, NGOs, for-profits, and civil society to ensure that the right people are involved in crafting research questions, understanding the data they are collecting, and using it effectively. This allows IPA to develop strong relationships with decision-makers, a deep understanding of local contexts, and a long-term view for evidence-based policy. IPA has more than 1,000 research staff across 22 countries.

Hundreds of millions of poor people have benefitted from IPA’s work through the scale up––based on evidence–– of proven programs such as the NORM model, free bednets, deworming medication, and targeted instruction.

The results of their research have been used by governments and NGOs to develop or scale-up programs that are reaching hundreds of millions of people. Other impacts are relatively smaller, such as the scale-up of a procedural justice training to all police forces in Mexico City, and the creation of an organization that aims to reduce hunger by providing credit and storage to poor farmers in Nigeria.

IPA’s research is behind the work of seven of The Life You Can Save’s recommended charities, including Evidence Action’s deworming and safe water programs, which were both incubated by IPA.

What can you help Innovations for Poverty Action achieve? Enter a donation amount below to find out.

What makes Innovations for Poverty Action so effective

Before recommending the scale-up of a program or policy, IPA ascertains whether the intervention works in multiple locales, how it works, and why. Then they can advocate for it more broadly, while continuing to refine its cost-effectiveness.

IPA produces policy publications, including plain language web summaries of individual studies and briefs that synthesize evidence from multiple studies, allowing organizations across the world to benefit from their research. IPA also works with media outlets to share findings with the public.

Proven anti-poverty programs continue in the country long after IPA’s work there is complete. Plus, IPA partners learn why their interventions work, as well as how to use rigorous evaluation methodologies in the future.

The results of their research, such as those on mask promotion & distribution, targeted instruction, chlorine dispensers, insecticide-treated bednets, and deworming have been used by governments and NGOs to develop or scale-up programs that are reaching hundreds of millions of people.  Their work has also influenced international development debates on crucial investments such as microcredit and cash transfers.

IPA is the R&D engine of global development. Your donation will help drive rigorous, evidence-based research on solutions to global poverty.

IPA excels at transparency and publishes its financial and operational disclosures for public viewing. Financial information and annual reports are available here on IPA’s website.

IPA’s studies have been funded either directly or indirectly by a variety of foundations in the academic, development, and policy research communities, including the Bill & Melinda Gates Foundation, the National Science Foundation, The World Bank, USAID, the Asian Development Bank, CGAP, DFID, 3IE, the Inter-American Development Bank, and the Ford Foundation.

What are IPA’s areas of focus? What is an example of their work?

A great example is IPA’s work with the Ghanaian Ministry of Education to design, evaluate, and scale-up a targeted instruction program that helps close the learning gap in schools. The program was developed based on evidence from India and Kenya, then replicated at scale in Ghana The program is now expanded to reach students at 10,000 government primary schools.

Where does IPA work?

IPA is active in 22 countries.

How will my donation be used?

All unrestricted donations to IPA are funneled to where they are needed most, such as growing IPA’s policy impact reach, developing cutting-edge innovations, and providing training to researchers and affiliates.

Just as with research grants, a portion of unrestricted gifts are put towards operating expenses to ensure their global staff has the necessary resources to accomplish their groundbreaking work.

IPA’s 2020 audited expenditures were US$35.5M — nearly 68% of which was allocated to direct funding for research projects. The remainder was put towards bolstering IPA’s Communications and Policy program (4.8%), new project development and fundraising (4.2%), research support and training (.9%%), advisory services (4.2%) and operations and financial management (18%).

Why should I donate to IPA?

Investing in IPA means investing in the next innovative solution. Many of the world’s top poverty-alleviation organizations and nonprofits have implemented successful programs that were discovered by IPA research teams.

As Dylan Matthews of Vox puts it, “If one of the essential features of good charities is their use of good, randomized experiments to back up their methods, then it follows that groups like IPA are needed to conduct those experiments, either in conjunction with charities or on their own. So giving to IPA is a good way to indirectly promote effective charitable work by other organizations.”

Randomized evaluations provide the most credible and reliable way to learn what works and what does not. They allow researchers to measure the impact on those who randomly received a program or policy to those who did not. These are the same methods used by high-quality medical research.

Funding for IPA’s research projects typically comes either from an organization’s evaluation budget or from individual donors. On occasion, IPA will secure direct funding for research and evaluation, and then search for partners to evaluate specific innovations or programs. More often, they work with their partners to identify potential funding sources and submit joint proposals.

Why does The Life You Can Save recommend Innovations for Poverty Action?

We recommend IPA because there is broad consensus in the nonprofit world that IPA is a leader in using randomized evaluations to test programs and influence policies. IPA research has helped identify numerous effective programs, including many that are run by our other recommended charities.

All photos and videos courtesy of Innovations for Poverty Action