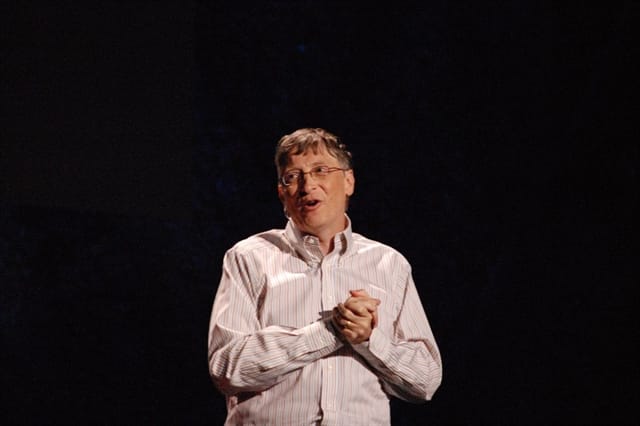 How to Give Like Bill Gates, Even if You Have Little to Give

“We see equal value in all lives.” That statement guides the work of the Gates Foundation, which has given $34 billion in grants since its inception—grants that are saving and improving millions of lives around the world. If you use the same principle to guide your own giving, it could dramatically increase your impact.

Read on to find out how, but first it's worth taking a closer look at the notion that all lives have equal value: it’s not as straightforward as it seems.

From bacteria to whales, every living thing on this planet has a life. Do all those lives have equal value? Most people would say no. Even the Dalai Lama admits to killing mosquitoes, but I doubt he’d intentionally kill another human being.

Strictly speaking, then, the Gates Foundation doesn’t believe that all lives have equal value—just all human lives. A small but important distinction, one that acknowledges the limits to our compassion.

It might be possible for a charitable foundation to see equal value in all human lives, but can an individual person be so objective? Do Bill and Melinda Gates personally assign equal value to every life, even to lives that are intertwined with their own? Do you? Probably not.

Imagine Peter Singer’s “girl drowning in the pond” scenario, but this time imagine that there are three girls in the pond. One is a close relative of yours: a sister or a daughter, a niece or a cousin. The second is your neighbor’s daughter. And the third is a girl you’ve never seen before and will probably never see again. Which one would you save first?

Most people would try to save a relative first, followed by a neighbor. The girl we don’t know would be last in line.

So much for equal value. We can argue that every life has the same intrinsic value, but when actual people are placed before us we usually consider their value in relative terms, placing a higher value on some lives than others.

The order in which we’d save the first two drowning girls is exactly the order predicted by evolutionary biologists. For decades, scientists struggled to understand how natural selection could have produced a behavioral trait such as altruism, in which an individual puts the needs of another before its own. It wasn’t until the 1960s that researchers came up with an explanation: related individuals share many genes, so even if I die saving the life of my niece some of my genes will be passed on to the next generation—possibly including the genes that triggered my altruistic behavior. Altruism among related individuals is common in many social animals. Another common form of altruism in nature, known as reciprocal altruism, is based on the possibility that if I help you now, you might help me in the future. That’s why, from an evolutionary standpoint, you would help your neighbor or anyone else with whom you have an ongoing relationship. Humans have built an entire infrastructure of cultural norms on top of this biological foundation: think, for example, of the maxims “charity begins at home” and “do unto others as you would have them do unto you.”

But now comes a mystery: what about the third girl, the one you don’t know and may never see again? Biology would predict that you would let her drown. You stand nothing to gain from saving her: she can’t pass on any of your genes (unless she marries into your family when she grows up), nor is she likely to help you in the future. To save her would be an act of what evolutionary biologists call “irrational generosity.”

But most of us wouldn’t let her drown. Why not?

That’s a big question, one whose answers in evolutionary terms are still being debated. Irrational generosity is not even unique to humans: other social animals engage in it, sometimes across species. The biologist Carl Safina, for example, has cited examples of wild elephants protecting people from hyenas, and humpback whales protecting seals from orcas. Clearly, some social animals have a strong helping instinct that goes beyond their individual self-interest or the self-interest of their genes.

Biological mystery or not, culturally it’s clear: saving her is the right thing to do. To stand by and let her drown, especially if the water is shallow and the risk to you is small, would be viewed by most people as wrong.

Now imagine a pond in which three girls are drowning, none of whom you’ve ever seen before. Which would you save first? That’s a harder choice, because now we can view the girls with the same objectivity as the Gates Foundation: each of those lives has equal value, both intrinsically and relative to us personally. We can use this fact to guide our irrational generosity in rational ways.

Using the Principle of Equal Value to Guide Your Giving

Billions of people on this planet are unrelated to us and aren’t our neighbors, so we should have no trouble seeing equal value in all their lives. Many of those people live in extreme poverty and are vulnerable to easily preventable diseases. If we want to do something to improve their situation, it makes sense to try to help the most people we can with the limited money and/or time we can afford to give. Otherwise we’re assigning more value to some lives than others, likely in an arbitrary way.

Because a given amount of money can do more good in developing countries than in wealthier nations, it logically follows that we should concentrate our giving in the developing world. A donation of $100 to effective charities working in developing countries can deworm 992 children or protect 500 people from iodine deficiency for the rest of their lives. Those interventions provide significant benefits to large numbers of people. A $100 donation is even enough to provide high-quality healthcare to three patients at a hospital in Nepal. In contrast, the median cost of one emergency room visit for common causes in the United States is $1,223.

If we agree that all lives have equal value, it also follows that we should not only try to help the most people we can; we should also aim to help those who need it most. While people who need our help can be found in every country, the neediest live mainly in the developing world. More than 2 billion people survive on just $3.10 per day and 896 million live on less than $1.90 per day. Those U.S. dollar values are adjusted for local buying power, so you’d have to imagine how you’d manage to get by in London, New York, or Tokyo on less than $2 or a little more than $3 per day. The answer: with extreme difficulty. Even a donation of $10 can make a difference to a family in this situation.

Some people bristle at these arguments, because poverty exists in even the richest countries and many of us encounter it daily. I might pass three homeless people begging for money on my walk to the post office to mail a check to the Against Malaria Foundation. There are elderly and mentally ill people in my city who suffer from malnutrition. Shouldn’t I help those people before I give money to organizations working in far-off lands? Shouldn’t charity begin at home?

The answers boil down to the degree to which you truly believe that all lives have equal value; they also boil down to whether you are striving to do the “most” good or simply “more” good. But it’s clear that if you give money to help one person here when the same amount could provide equal or greater benefit to 50 or 500 people elsewhere, you are placing more value on the lives of people here. Why? Is it because you can see them with your own eyes? Is it because you feel a civic responsibility to help others in your community? Is it because you’re not sure an overseas donation will accomplish as much good as claimed? These are not easy questions, but they’re worth confronting. See Peter Singer’s books The Life You Can Save and The Most Good You Can Do, as well as William McCaskill’s book Doing Good Better, if you want more perspective on these issues. What does it look like when you base your giving on the principle that all lives have equal value? The first chart at right shows the Gates Foundation’s funding by category in 2014. It allocates about 13 percent to projects in the United States, but the rest goes mainly to its global health and development programs, which largely work in developing countries.

Contrast this with the charitable giving in the United States as whole in 2014 shown in the second chart at right, where only 4 percent of giving goes specifically to international development. Does that mean Americans value American lives above all others? Not necessarily: it’s more likely that donors don’t even stop to consider the equality of lives and simply give to causes that are important to them personally (mainly religion, education, and health and human services). Americans gave $358 billion in 2014, nearly 100 times the $3.86 billion given that year by the Gates Foundation. While nobody has done the calculations, it’s conceivable that the Gates Foundation may have actually saved—or at least significantly improved—more lives.

If you’ve read this far, hopefully you’ll agree that there are good reasons to shift the balance of giving toward charities and programs that work to reduce poverty and improve public health in developing countries. You can play a role in that change by ensuring that your own giving is consistent with the principle that all lives have equal value, and by supporting The Life You Can Save and other organizations that work to raise awareness of these issues. Your pockets may not be as deep as those of Bill and Melinda Gates, but by applying their principles to your own giving you can accomplish much more good than you might otherwise.